SWINE FLU: What can you do to stay healthy?

What can I do to protect myself from getting sick?

- Cover your nose and mouth with a tissue when you cough or sneeze.  Throw the tissue in the trash after you use it.

- Wash your hands often with soap and water, especially after you cough or sneeze.  Alcohol-based hand cleaners are also effective.

What should I do to keep from getting the flu?

- First and most important: wash your hands.  Try to stay in good general health.  Get plenty of sleep, be physically active, manage your stress, drink plenty of fluids and eat nutritious foods.  Try not to touch surfaces that may be contaminated with the flu virus.  Avoid close contact with people who are sick.

Information taken from the US Centers for Disease Control and Prevention (CDC).

For more information go to cdc.gov/swineflu 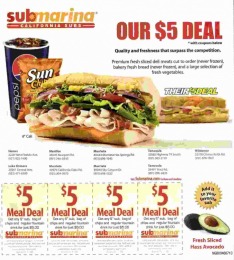 At SUBMARINA we offer a $5 Meal Deal - Get any 6" sub, bag of chips and a regular fountain drink for just $5.00 (see coupon for details, expires 6/7/2009).  Bring this coupon to our store or just mention that you saw the coupon on our blog.

Quizno's is advertising a $4 sandwich, a dollar less than Subway's $5 promotion, I had to try it.  I ordered the $4 Italian sandwich which consisted of pepperoni, capicola, ham, mozzarella, chopped lettuce and tomato, red wine vinaigrette.

Imagine my surprise when the server pulled out a breadstick for the sandwich, I asked "Is that it?" "Yes," he replied.

The meats and cheese were only half slices, the lettuce and tomato were chopped up and sprinkled together on the sandwich.  The taste - OK.

Sadly, this was a disappointment.  Compared to Subway's $5 footlong and SUBMARINA's $5.49 meal deal (six inch sub + chips + drink) this was a non-starter.

In my opinion this sandwich is not a $4 value, for a dollar more I can get a Subway footlong and for a $1.49 more a meal at SUBMARINA.

I rate this  Quizno's sandwich value at $2, although at $2 this would be a good deal. I wonder how many customers will order this sandwich again?

How to make the world's greatest sandwich!

I decided to include a short video on the "world's greatest" sandwich.  This sandwich is a creation by Chef Thomas Keller of The French Laundry in Napa Valley.

At the end of the video is the full recipe for the world's greatest sandwich.  If you do make this sandwich please post a comment in the comments section to let me know how it turned out.

What is a Sub?

A Submarine sandwich, also known as a sub, grinder, hoagie, Italian sandwich, po'boy, and other various local names is a sandwich made using a 6, 9 or 12 inch roll split into two long pieces or opened into a "V" on one side.

Today you don't see the "V" often - the major chains - Subway, Quiznos, SUBMARINA do not do the "V" cut (although I remember Subway did do the "V" cut almost exclusively about ten years ago).  Some of the mom-n-pop sub shops still do the "V" cut.  If you desire, request a "V" cut for a different presentation.

The sub sandwich is filled with various meats, cheeses, vegetables, spices and sauces.  The submarine sandwich has no generic name and the terms submarine and sub are in common usage throughout the United States in addition to regional names.

We'll save a discussion of SUBMARINA's sub ingredients (meats, cheeses, etc.) for a later post.

The sub sandwich originated in different Italian American areas in the Northeastern US about the late 19th century.  By the mid 20th century, the subs popularity spread from Pennsylvania, New York, New Jersey and Massachussetts to the rest of the country.

A Commitment to Quality and Freshness

"Every ingredient we use to make any (of our excellent sub sandwiches) is hand selected from the very finest meats, cheeses, fresh produce and bakery-fresh bread.

At SUBMARINA, we know that great tasting sub sandwiches start with the freshest, high quality ingredients.  That's why I personally select and oversee every source that contributes to all of the sandwichwes we make..."

The power of an online coupon was demonstrated by Domino's Pizza which gave away 11,000 free pizzas because of a never used promotion, that a savvy web surfer stumbled upon.  Apparently, the company had prepared an internet coupon for an ad campaign to begin in December but which never was activated.

Someone discovered (on March 30) that the codeword "bailout" was good for a free medium pizza ordered online.  The info spread throughout the Web until the code was deactivated 24 hours later.

Some Domino's franchisees gave away over 600 free pizzas.  This is not really as bad as it sounds - Domino's received excellent publicity not only for it's pizza but also for its new online ordering system.

"Every ingredient we use to make your Albacore Tuna sub sandwich or any of our other Submarina favorites is hand selected from the very finest meats, cheeses, fresh produce and bakery fresh bread.  This is especially true for our Albacore Tuna sub as I felt strongly that Submarina use only the freshest line-caught, dolphin safe, white albacore tuna from a well known company like Chicken of the Sea."

Try our Albacore Tuna as a tuna sub, tuna salad or tuna melt.