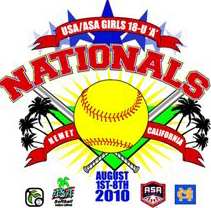 On Sunday, August 8th, the 105 team tournament was won by The Stone City Sharks  of New Lenox, Il. The Sharks beat the San Diego Renegades  in 10 innings with the winning score of 9-7.

Los Angeles Sol Folds. What Will happen to Michelle Enyeart?

As you may recall, last week I wrote about our local Hemet girl, Michelle Enyeart, being drafted by the LA Sol soccer club.

Last week the LA Times reported that the LA Sol was shut down by the Women's Professional Soccer organization.

The question is, what will Michelle do now?  If you have an idea please leave us a comment.

All of us at Submarina wish Michelle a very prosperous and succesfull year.

Michelle Enyeart, Hemet HS class of 2006, has been drafted by the LA Sol football (soccer) club.

I am happy to see that "Shelly," I've known her since she was five when she accompanied her mom Cheryl, who played volleyball at Valley-Wide, has become a star professional athlete.

Michelle spent her college soccer career at the University of Portland where she scored 48 goals and racked up 40 assists.

She will join Marta, Shannon Boxx and other top notch athletes on the LA Sol soccer team.

I'm certain "Shelly" will be a very valuable asset on LA Sol.  Hope to see Michelle in the next Olympic Games.

Who are the "Lucky Lakers?" Are They Our Local Team the Los Angeles Lakers?

I am always curious about how things started.  I haven't talked about the LA Lakers for a while now, so when I came upon "Lucky Lakers" it piqued my curiosity.

Are the "Lucky Lakers" our LA Lakers?  It appears that they are.  As discussed in a previous post the LA Lakers started their history not in Los Angeles but elsewhere.

They got their nickname "Lucky Lakers" not from a lucky shot in a game but from an airplane mishap while returning home from a game.

The Minneapolis Lakers, yes Minneapolis - they played in Minneapolis, Minnesota for 13 years before moving to LA - were flying back from St. Louis after a game against the Hawks (who remembers the St. Louis Hawks? if you do shoot me a comment).

On January 18, 1960 while flying home both generators on the Lakers DC-3 airplane failed shortly after take-off knocking out all lights, the radio and internal cabin power.

The pilots first thought they could fly home by "eyeball navigation," unfortunately the ice became too heavy and they were forced to land in a snowy field near the town of Carroll, Iowa around 70 miles from Des Moines.

The plane's two pilots and 23 Lakers' passengers survived the landing, being met on the ground by two vehicles, the local ambulance annnnnnnnd the undertaker's vehicle!

See the Padres Friar hit the beach.  Surf's up Dude!

YouTube is an amazing thing.  While surfing youtube I came upon three videos SUBMARINA did in partnership with the San Diego Padres in 2006.

The first one is shown below - I will post the other two next week.

The Friar is the Padres mascot, didn't know that did you?

On a lighter note - Who are (were) the Detroit Gems?

In 1947, for $15,000, the Detroit Gems were bought by two businessmen from Minneapolis.  The question was what to name the Minneapolis team - naturally a naming contest in the the state called the "Land of 10,000 Lakes" determined that the Gems would be named the Lakers.

After moving to Minneapolis, and acquiring George Mikan, the Lakers went on to a string of successful seasons, winning 6 championships in the next 7 years.  After George Mikan retired in 1956 the Lakers fell on hard times and changed ownership in 1957, and in 1960 moved to Los Angeles.  The rest, as they say, is history.